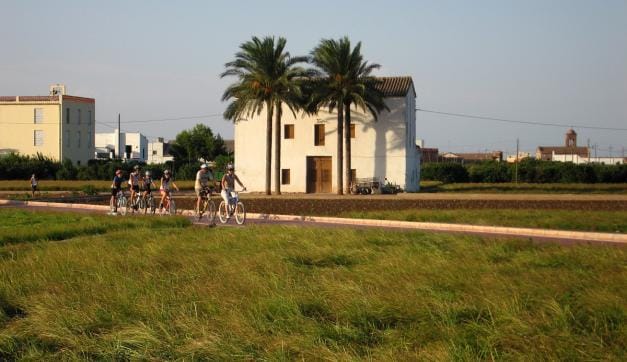 To the north of the city of Valencia, a large part of the Horta of Valencia, or the Vega del Túria, as it was once called, has been conserved. While riding amongst typical crops, note the tiger nut, used to make the highly-valued Alboraia orxata.

The Greenway follows the platform dismantled while conserving the narrow-track (FGV) and RENFE lines. This was a part of the Calatayud-Valencia railway that joined the towns of Calatayud, Teruel, Sagunto, Valencia and Grau. It was one of the few Spanish railways that made a profit, but the new lines to Zaragoza and Canfran, and the one coming from Tarragona, parallel to this one, led to its closure.

It cuts through a landscape of enormous cultural and ethnographic value. This is the last part standing of the historical cropland irrigated with water from the Túria River, an example of a water operation of Roman origin. Reinforced and extended by the Arabs, such an operation would be difficult to find elsewhere on the planet. The Tribunal de las Aguas (Water Court) has been judging disputes between agriculturalists regarding the ditches irrigating these lands since time immemorial.