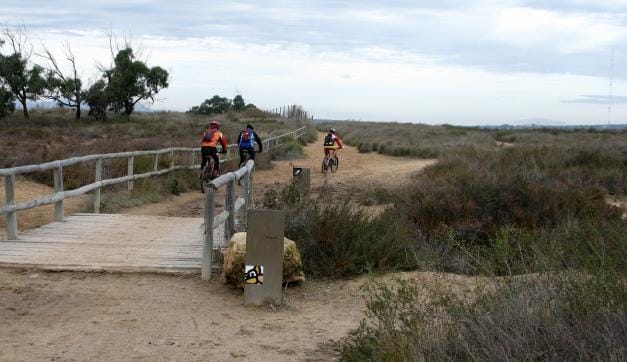 This Greenway begins near the leisure park, the Habanera Museum and the Salt Industry Interpretation Centre. We soon see the huge mountains of salt as we travel through the Mata and Torrevieja Lagoons. We skirt the Torrevieja lagoon, considered the largest saltwater lagoon in Europe, with a 25-km perimeter, measuring 7 km in length. This Natural Park is one of the most important in the Region of Valencia, and is the largest lagoon after the Albufera of Valencia. A colony of flamingos nests and lives there almost permanently, since they no longer need to hibernate in Africa. The warm, constant temperatures in Torrevieja and southern Alicante allowed certain migratory fowl to change their habits.

The Greenway runs very close to the shore, so we can approach the water in certain sections, on red, highly salty earth, covered with steppe vegetation adapted to such harsh conditions. A calm route, suitable for the entire family, on a branch of what was once the old Alicante-Murcia railway, along its detour to Torrevieja for salt transport.